The latest release of Fork for Mac is now available for download. This version ships with more new features than usual – some of them will be featured in greater detail in a separate post. Let’s take a look at all of the new features, bugfixes and improvements that made their way into the fresh release of Fork!

Gone are the days when you had to press ⇧⌘F every time to get the latest changes from a repository. Fork will now perform an automatic fetch of all remotes in open tabs every 20 minutes. This option can be disabled in the contextual menu of a remote, or globally in Fork preferences. [35]

You might have often found yourself in dire need of canceling some of the longer git operations. Fork 1.0.67 adds the ability to cancel fetch, pull, push, and clone – the button to do so is located in the status bar.

In addition to the ability to cancel long-running operations, Fork can now display past and current activities together with their results.

The popover is available by clicking the button on the left-hand side of the status bar. All of the operations are shown with their respective outputs on the right should you need a closer look. If there are multiple activities running simultaneously, activity manager is the place to cancel the one you need. [12] [231]

Sometimes we require some additional git magic that Fork doesn’t support yet. Or we might just want reuse complex commands and invoke them easily from the convenient Fork GUI.

All of that is now possible with custom actions! Define your custom scripts in preferences and invoke them with a right click on a commit: 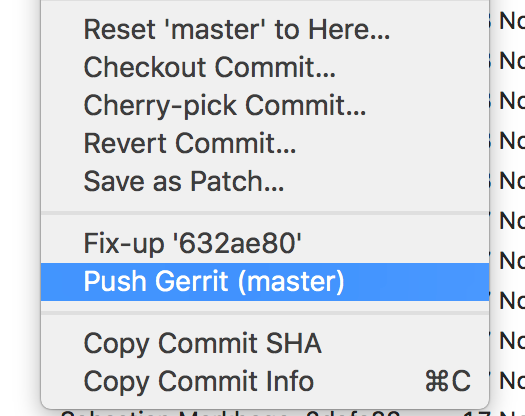 Or a click on ‘Open in’ button in the toolbar, if your action does not need a particular commit to operate: 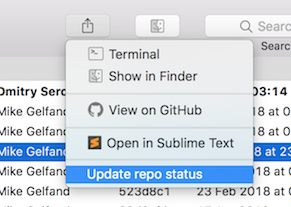 Save commits as patches

Some development workflows require participants to apply their git commits as patches. This new feature in Fork allows you to save a commit in .patch format. The resulting file is saved to disk and can be subsequently sent by email to your fellow team members. 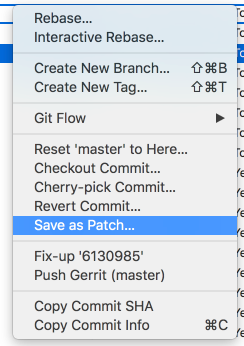 Fork’s toolbar in version 1.0.67 gets a new button to perform one of the most frequent git actions – creating a new branch. The button is included in the default toolbar set, to the right of the status bar.

You may have noticed that the previous pic showcased something more than a custom action in ‘Open in’ menu. If you have Atom, Sublime Text or Visual Studio Code installed, Fork can now open the whole file hierarchy in the current repository using one of those text editors. This change is quite useful for everyone who uses Atom, Sublime or VSCode for their primary development – for instance, NodeJS or Python developers. [280]